Hi! I'm Angela, and I'm The Girl Who Went Paleo. I started this blog to keep myself motivated to eat the right things and work out in order to feel well (and not to look 'good' for others.) Be encouraged, join in on the topics, share some recipes. Sit back and relax and let me tell you about my paleo experience! 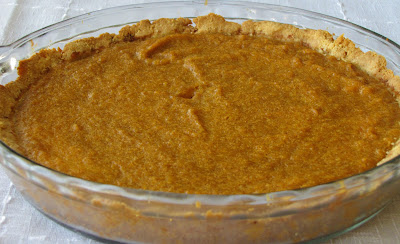 What's the one thing you miss since you've been on the paleo ride? Me? I miss desserts. I tell you what, I used to be a candy/cake/cookies/brownies/pie crazed woman. I used to pick out the red and purple skittles and eat those in bed. Once those flavors were gone, I would eat the green - then yellow - then orange. Sometimes my husband would look at me like "What the heck are you doing? How do you eat that garbage." But as sweet as he is, he smiled and continued watching tv with me. I love that man :) 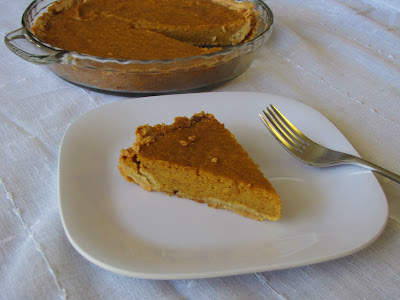 I've made several pies that have been very tasty. Check out my paleo strawberry pie here! My sister recently made a paleo pumpkin pie and it was out of this world amazing! I hope you post your recipe soon so I can link up with you .. ahem, ahem. I'll be making a pumpkin pie soon and we'll see who's is better. Pumpkin pie and October/November just go hand in hand.
Well, I recently made a non-paleo sweet potato pie that is my mother's recipe. I don't know where she got it from or if it is a secret family recipe but I'll share with you my paleo version of it here. I have a non-paleo blog that I'll share the sugar-laden recipe to.. I'm not giving you that blog website unless you ask. Nicely. I don't want to be the bad influence, okay?
Let's move on to this pie. It's light and airy and is simply sweet. It has a little maple syrup for the sweetener along with the natural sugars from the sweet potatoes. This pie is so quick to throw together and it tastes great. I live for simplicity.
Ingredients:
Makes 1 pie crust and 1 pie filling
Pie Crust Recipe:
2cups almond flour
3Tbsp liquid egg whites or 1 egg yolk
pinch of salt
1/4cup ghee or unsalted butter 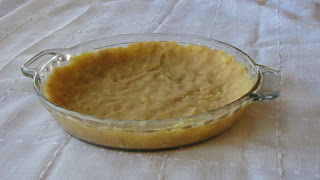 ﻿
Sweet Potato Pie Filling:
2oz. butter, softened
1cup cooked and mashed sweet potatoes
3/4cup pure maple syrup
1/4cup almond milk or coconut milk
1tsp vanilla
2eggs, beaten (poor eggs.. why are they always so abused?)
1tsp cinnamon, or pumpkin pie spice
Directions:
Preheat oven to 350degrees.
In a large mixing bowl, add all of the pie crust ingredients together and pour into a lightly greased pie pan. Gently press down on the bottom and along the sides of the pie plate. Set aside.
In another large bowl, add the butter, sweet potatoes, maple syrup and milk and beat until well blended. Add the vanilla, eggs and cinnamon and mix well. Pour into the pie pan and bake approximately 60 minutes or until the middle has set.

I always ask my kids to try my recipes because if they like it, I know you will, too. They both scarfed it down quickly and gave me a thumbs up. If you try this recipe, please leave me a comment and let me know what you think about it!

Oh, and don't feel guilty if you splurge on this treat. You're special and you deserve to bake a pie and eat it too!
~Angela
Posted by Unknown at 12:53 PM